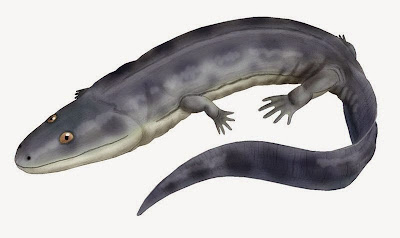 Mathematics can be wonderful. Just think about the Fibonacci sequence that is seen in almost everything that lives and in some things that don’t, such as broccoli, seeds, ammonite shells, flower petals, compound eyes and the arms of spiral galaxies.

But when it comes evolutionary mathematics, it’s an entirely different story. In 2010, Nature published a paper on supposedly 395 million year old fossilised tracks found in Poland.

That silenced some of the buzz around Tiktaalik, which was assumed to be the link between sea creatures and land animals.

Now, a new study claims that a “333-million-year-old” animal from Australia was the first tetrapod or four-footed animal to walk on land.

According to New Scientist:

“IT WAS one small fall for a tetrapod, but it signals one giant leap for tetrapod kind. A broken leg bone pushes back the emergence of our four-legged ancestors from water on to land by at least 2 million years.

A gap in the tetrapod fossil record means we know little about what happened between the time when limbs evolved from fish fins some 360 million years ago and the first land-adapted tetrapods appeared 330 million years ago.

To find out, Peter Bishop at the Queensland Museum in Hendra, Australia, and his colleagues analysed a rare tetrapod fossil from that gap, a 1.5-metre-long Ossinodus which lived some 333 million years ago in what is now Australia. They found that Ossinodus's forearm bones were strong enough to support the animal's body on land.”

But in the evolutionary story, many birds are older than the dinosaurs from which they supposedly evolved, so perhaps we’re seeing a similar kind of mathematics here also.