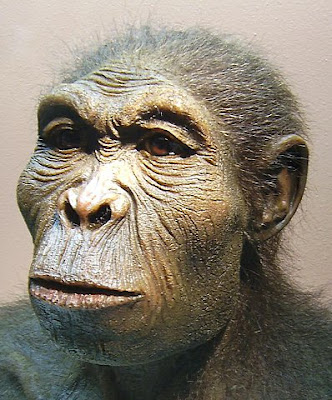 Reconstruction of Homo habilis. Many paleoanthropologists now believe that this species doesn’t even exist. Image courtesy of Lillyundfreya, CC BY-SA 2.5.

Evolutionists seem to have a hard time pondering whether or not we are still evolving.

Last year, research suggested that human evolution has not stopped.

Now, Joseph Pickrell at Columbia University in New York and colleagues published a paper in PLoS Biology, suggesting that we are indeed evolving, albeit slowly.

How did they discover this?

They found that a variant, of the gene CHRNA3, which is often associated with heavy smoking, has become rarer.

An article in New Scientist also mentions that a variant of the gene ApoE4 that is “known to increase the risk of late-onset Alzheimer’s disease, as well as cardiovascular disease, may also be getting rarer.”

So, it seems that researchers have noticed some tiny changes in human gene variants. But it is still a long way to Tipperary (or anywhere else).

There are better explanations for why people smoke less (or not at all) or have become less prone to Alzheimer’s: epigenetic changes resulting from leading a healthier lifestyle (i.e., more exercise and a wholesome diet).