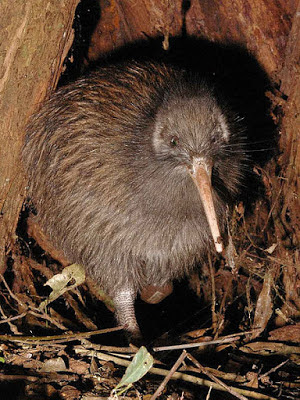 It seems that Darwinists are hoping to convince the unconvinced that evolution can go backwards. In doing so, they might resort to Orwellian newspeak, i.e., change a word’s meaning to the opposite of what it originally meant.

New Scientist suggests that losing eyesight is 'regressive evolution'
. It attempts to give a reason for why this might be thought of as evolution:

“The flightless nocturnal birds may be evolving to lose their eyesight altogether, suggest the researchers. The blind kiwis seem able to survive just as well using other senses such as touch, smell and hearing, so maintaining good eyesight might be a waste of energy.”

Some cave salamanders, crabs and arachnids can get along well in their dark world although they can’t see.

Kiwis are nocturnal birds. Flightless, they don’t look like the average sparrow. They lack flight feathers and their bones are heavier than those of most birds.

Archaeopteryx, for instance, had feathers that are more “modern” and birdlike than the ones kiwis have.

So, losing a trait can hardly be called evolution, unless, of course, evolution refers to all kinds of change, but then it will no longer be of the Darwinian variety.