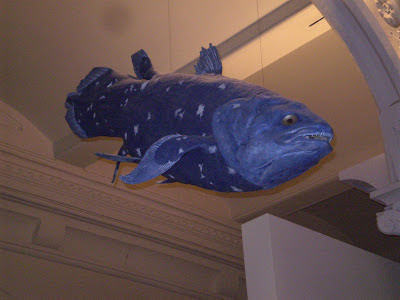 Latimeria chalumnae is a lobe-finned fish that did not leave the sea.

“The evolutionary story we have written to explain our ancestors’ move from sea to land may need a rethink,” Colin Barras writes in New Scientist.

But then he continues with the very story that he says needs a rethink, or has to be thrown out due to a dire lack of evidence:

“Roughly 360 million years ago, one group of lobe-finned fish began evolving into four-legged, land-living animals that resulted in reptiles, amphibians and mammals like us.”

Perhaps it would be good to remember that the original dino fish or the coelacanth Latimeria chalumnae is a lobe-finned fish that did not leave the sea.

Evolutionists once assumed that it became extinct together with the dinosaurs, but some 200 living specimens have been found. This hardy living fossil has hardly changed in “380 million years”.

A paper recently published in the journal Nature Ecology & Evolution looks at a lobe-finned fish known as Hongyu chowi. Discovered in China in 2002, the 1.5 metres (5 feet) long creature does not fit into the Darwinian tree of life.

As it has features that it shouldn’t have, researchers had to invoke convergent evolution to hammer it onto the fallen tree.

Convergent evolution is often used in attempts to fix Darwinian dilemmas, but it often serves to make them worse.