Darwinian Theory of Mind: Making Apes Out of Humans – And Humans Out of Apes 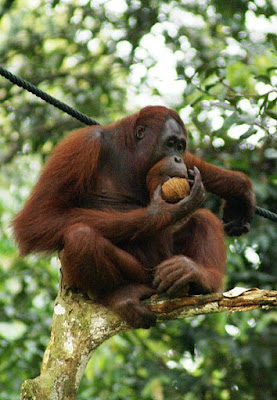 I spy with my little eye something beginning with R. Image courtesy of Eleifert, Creative Commons (CC BY-SA 3.0).

Evolutionists are averse to seeing humans as special. They want to see us as just another species of great ape, although the gap separating us and animals is so wide that no monkey can jump over it regardless of its attempts.

The latest Darwinian attempt is an experiment in which chimpanzees, bonobos and orangutans watch a video clip featuring a human being dressed as King Kong steals a rock from another human being and hides it in a box. Then King Kong drives the man away and puts the rock in another box. Then he changes his mind and takes the rock away.

The researchers used an infrared eye-tracker to see where the apes would look. Most of them fixed their eyes on the boxes and many looked at the one where the man assumed the rock was – although it wasn’t.

The Darwinian explanation for this is that apes have a theory of mind.

We could obviously do the experiment with dogs and get a similar result, as in many ways they are cleverer than chimps or other apes. But in the Darwinian world, dogs aren’t our close relatives, so such a result wouldn’t make headlines.

In a created world we would expect animals to be intelligent.

But we would not expect them to use language or worship their Maker or build theories, as they most probably are not capable of abstract thinking.

Only humans are created in the image of God and as such we are special:

“What is man that you are mindful of him, and the son of man that you care for him? Yet you have made him a little lower than the heavenly beings and crowned him with glory and honor. You have given him dominion over the works of your hands; you have put all things under his feet.” (Psalm 8: 4–6, ESV).