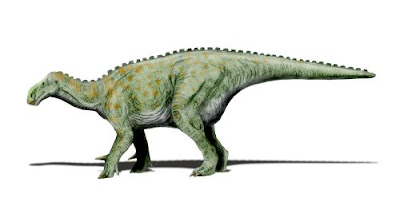 Brains are soft. They are not supposed to last over 130 million years.

But that is exactly what some researchers now believe.

Found in 2004 on a beach near Bexhill in Sussex, England, the fossilised brain of an iguanodon has in the past few days made headlines all over the globe.

Researchers examined the brain with a scanning electron microscope. Writing in The Conversation, Alex Liu of the University of Cambridge discloses what they found:

“This revealed evidence of the dinosaur’s meninges, the tough, collagenous outer membranes that protect the main brain. It also showed up tiny blood vessels preserved as tubes running across the surface of the specimen. There are even hints of deeper tissues that may have formed part of the brain cortex, the functional part of the brain that contains neurons.”

This kind of preservation is a big mystery for believers in millions of years. However, he proposes a scenario that he assumes is plausible:

“We think this level of preservation was possible because the brain tissue was effectively pickled before it was mineralised, probably after the dinosaur died in a highly acidic and low-oxygen body of water. The soft tissues were preserved by phosphate and iron minerals, and CT (computed tomography) scans show the fossil also contains sediment, as well as fragments of leaves, twigs and bone.

Taken together, these observations create a picture of the dinosaur dying in a well-vegetated, swampy environment. Its head probably became buried in the sediment on a river- or lake-bed, and the lack of oxygen allowed the brain tissues to mineralise before they had a chance to decay.”

The past two decades have seen the discovery of more and more soft tissue – and even radiocarbon (C-14) – in fossils assumed to be tens if not hundreds of millions of years old.

The current record holder is a complex Cambrian brain assumed to be 520 million years old.

The most logical explanation is that the animals can’t be that old. That obviously is something evolution-believing researchers are not prepared to admit, at least not yet.

Liu, Alex. 2016. First dinosaur brain fossil suggests they may have been smarter than we thought. The Conversation (27 October).