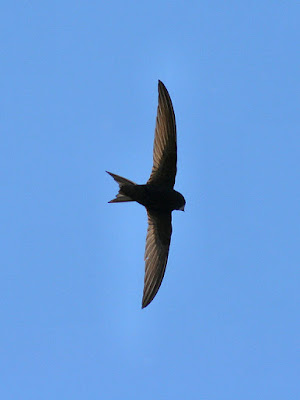 Fly me to the Moon – and back, seven times. Image courtesy of Paweł Kuźnia, Creative Commons (CC BY-SA 3.0).

Swifts spend a lot of time in the air, perhaps more than any other birds.

Each year, the common swift (Apus apus) roosts two months in Europe and then flies off to Africa.

Researchers at the University of Lund in Sweden fitted seven common swifts with lightweight data loggers and monitored their travels for two years.

Three of the birds stayed in the air for 10 months, and the others landed occasionally but very briefly, “never for more than half a per cent of the total time of their migratory periods,” says Anders Hedenström, who with his colleagues published their research in the journal Current Biology.

Hedenström thinks that the swifts might take power naps in the air. As they can live for 20 years, during their lifetime they probably travel a distance that equals 7 times to the moon and back.

So, what is the Darwinian explanation for such behaviour? There probably isn’t one.

Birds are a big problem for evolutionists. While they have made much of Darwin’s finches, the birds themselves do not conform to Darwinian expectations.

Many other species and traits cause additional problems, for instance starling murmurations, anti-crash systems, cooling beaks and anti-freeze.

What is more, birds such as robins, hummingbirds, cockatoos and bowerbirds display many signs of very intelligent design that cannot be explained away by evolutionary storytelling.