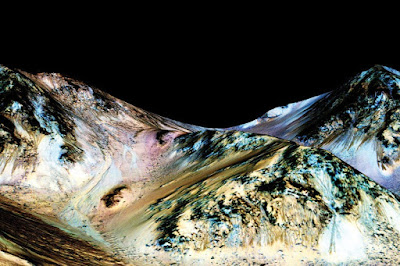 In July, scientists were saying that there’s probably no life on Mars. They were not sure whether the red planet was wet or dry.

But now the story has changed dramatically. A brief report in TIME’s newsletter suggests:

“Mars may be the solar system’s most tragic planet. It once had a dense atmosphere; it once fairly sloshed with water; just one of its oceans may have covered two-thirds of its northern hemisphere.”

Sloshed with water? That is an interpretation unsubstantiated by the evidence. This doesn’t seem to prevent speculations, however:

“With seasons very much like Earth’s, it could have been home to who knows what kinds of life. But Mars suffered an apocalypse that’s never quite been explained; perhaps meteorite bombardments blasted its atmosphere into space, and the planet’s weak gravity frittered away the rest. The result either way is the cold, dead, dry world we see today. Except now, it seems, it’s not so dry—and perhaps not so dead.”

One of the things these speculations often ignore is that in order to sustain life, a planet needs more than just water. Plate tectonics and a big moon are also needed. Venus is Earth’s sister planet, and yet no one would expect to find life there.

Unlike Mars or Venus, Earth seems to be unique, fine tuned for life.

In other words, God created this planet to be habitable.