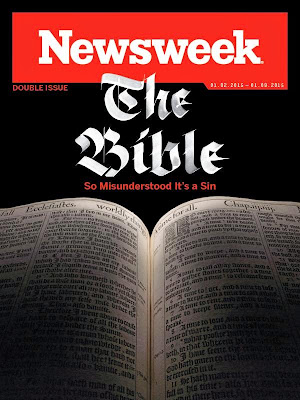 At Christmas, Newsweek attempted to re-interpret the Bible.

Neil deGrasse Tyson was not the only sceptic who took a swipe at Christianity the past Christmas. Newsweek did so too – in a very long article abounding with myth and errors.

Perhaps the words recorded in 2 Peter 3:15–16 illustrate what writer Kurt Eichenwald attempts to do with Scripture:

“Our beloved brother Paul, according to the wisdom given to him, has written to you, as also in all his epistles, speaking in them of these things, in which are some things hard to understand, which untaught and unstable people twist to their own destruction, as they do also the rest of the Scriptures.” (NKJV)

What he doesn’t say is that the copyists were very careful with the text, especially the Hebrew scribes who copied the Old Testament. While the monks who copied the New Testament scriptures might not have been as fluent in the original languages, they would not dare to add their own ideas into the Bible.

Newsweek goes on to say:

“These manuscripts were originally written in Koiné, or ‘common’ Greek, and not all of the amateur copyists spoke the language or were even fully literate. Some copied the script without understanding the words. And Koiné was written in what is known as scriptio continua—meaning no spaces between words and no punctuation. So, a sentence like weshouldgoeatmom could be interpreted as ‘We should go eat, Mom,’ or ‘We should go eat Mom.’”

Eichenwald neglects to mention – or doesn’t know – that Greek nouns have case. Seen in this light, his example is odd, as it is often not too difficult to distinguish between the subject and the object, for instance.

He says that the Bible is “loaded with contradictions and translation errors and wasn’t written by witnesses.” This is false.

He harps on the assumed two contradictory creation accounts of Genesis 1 and 2. (See more here and here.)

Most scholars would agree that the Apostle Paul wrote 1st Corinthians some 24 years or so after Christ’s resurrection. The letter includes probably the earliest account of its eyewitnesses.

Paul writes: “He appeared to more than five hundred of the brothers and sisters at the same time, most of whom are still living” (1 Cor 15: 6, NIV).

Eichenwald also claims that the King James Bible was not translated from the original languages (Hebrew and Greek). That would be news to most Bible scholars.

In conclusion, Eichenwald seems to have an agenda – to misrepresent biblical Christianity and to interpret it from a liberal perspective that assumes God could not protect His word from error.

It is an assumption that he cannot prove. In contrast, the Bible is meticulously reliable even in its tiny details.

This is something that we would expect, given its Divine authorship.