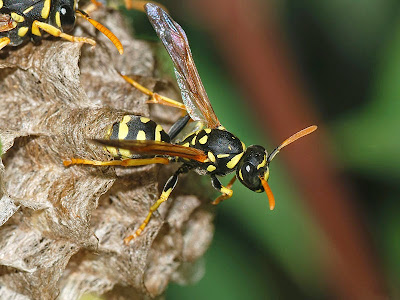 According to Science Daily, “Polistes fuscatus, a paper wasp found throughout North America, evolved better vision to recognize the variable facial patterns of other members of its species.

So, now instead of a Darwinian struggle for existence, we seem to have co-operation.

“Some wasps have developed bigger eyes, and thus better vision, to read the social cues written on the faces of their sister wasps, according to a new University of California, Berkeley, study.”

"The Big Bad Wolf had it right. When Little Red Riding Hood said, 'Goodness, what big eyes you have,' he replied, 'The better to see you with.' "

Sheehan suggests that some paper wasps “evolved better vision for the purpose of telling one another apart. This is consistent with the idea that hearing, smelling, seeing or other sensory capabilities in animals, including humans [sic] may have evolved in response to communication signals like we see in the wasp."

Sheehan and his colleagues published their paper recently in Biology Letters. He points out that the findings don’t “overturn evolutionary dogma”. His clarification does show, however, that evolutionists tend to be very dogmatic and that the Darwinian community seldom if ever approves of dissenting views.

Anyway, it might be time to bury the Darwinian concepts of survival of the fittest and the struggle for existence.