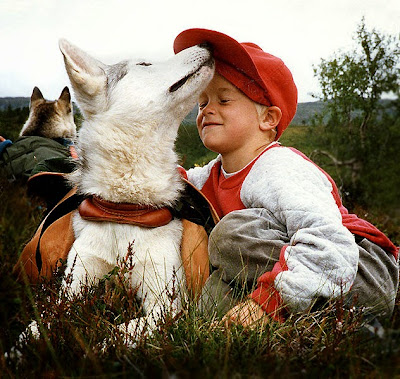 Some evolutionists see a common trend towards smaller brains in humans and dogs. Siberian Husky. Image courtesy of Per Harald Olsen, via Wikipedia.

The human brain is an enigma. There is nothing quite like it in the animal kingdom. Many neuroscientists would agree that it is wonderfully made.

However, for some time, evolutionists have speculated that our brains have shrunk or are shrinking.

According to a recent article in New Scientist, “Our brains have shrunk in the past 20,000 years. In The Domesticated Brain, Bruce Hood argues that it's a result of living together in societies.”

Some evolutionists assume that 20,000 years ago, the brains of our ancestors were 10 per cent larger than ours are now. Bruce Hood, a psychologist at the University of Bristol, UK, suggests:

“We have been self-domesticating through the invention of culture and practices that ensure that we can live together."

Hood takes a look at animals that humans have domesticated and concludes that they all have “lost brain capacity as a result. Bred for passivity, their testosterone decreases, reducing the size of all organs. Dogs are a good example and the effect on their behaviour is telling: where wolves will try to solve a problem through cunning, dogs are adept at soliciting help from their masters.”

He believes that a similar trend is seen in humans. We have smaller brains than our ancestors because we live in societies instead of hunting in small groups in the savannah.

The problem with Darwinian storytelling is that it tends to ignore facts, pick and choose its ingredients and it always assumes that goo-to-you evolution is true.

Early men were no simpletons. They built monuments like the pyramids that we are unable to construct. Genesis describes humans who were creative and innovative from the dawn of mankind – it should be no surprise, as they were created in the image of the Creator.