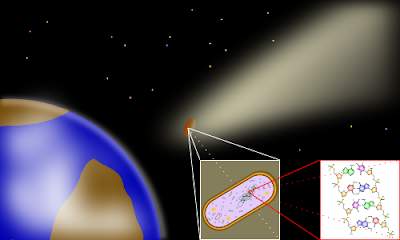 In episode 11 of Cosmos, Neil deGrasse Tyson continues his evolutionary show by discussing the origin of life, which is a hard nut to crack for those who are unwilling to accept a Creator God.

Over 30 years ago, Sir Francis Crick acknowledged the difficulties involved in a naturalistic origin of life. In his book Life Itself (Simon and Schuster, 1981) he stated: “An honest man, armed with all the knowledge available to us now, could only state that in some sense, the origin of life appears at the moment to be almost a miracle, so many are the conditions which would have had to have been satisfied to get it going."

Unwilling to allow for a transcendent Creator, Crick embraced the panspermia view, according to which life originated somewhere else in the universe and was seeded or brought here by a comet, asteroid or rock. Or by space aliens.

Panspermia (Gr. Πανσπερμία) means ’all seed’ and it postulates that life exists everywhere in the universe and can travel through outer space.

The view has insurmountable problems, and it only pushes the enigmatic solution a few thousand light years further away from us. After all, life had to begin somewhere.

Many secular scientists have stated that panspermia does not work. The elements of life would be destroyed by cosmic radiation en route to us.

In spite of this, Cosmic host Tyson believes that life came from space. This might be in keeping with his naturalistic faith, but it has nothing to do with science – and all with science fiction.