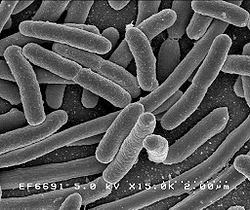 E. coli. Image courtesy of Rocky Mountain Laboratories, NIAID, NIH. A letter in Nature suggests that the bacterium is even more complex than previously thought.


Bacteria are anything but simple. A recent letter in the journal Nature discusses the overflow system in Escherichia coli and states:

“In bacterial cells, the overproduction of metabolites is normally avoided by mechanisms that are similar in principle to control systems in engineering.”

As far as we know, blind Darwinian processes are incapable of engineering feats. But there’s more:

“We all know that a kitchen sink is liable to overflow if the tap is left on with the plughole blocked. In most domestic sinks this danger is averted, at least partially, by having an overflow outlet near the top. But in more elaborate engineered systems, such as the domestic toilet, an overflow is avoided by means of negative feedback: as soon as the water in the tank reaches a certain level, the inflow is switched off. Bacterial metabolism is in many ways similar.”

Somehow, this sounds like a very intelligently designed system.