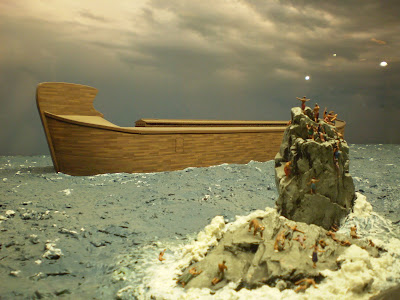 The Flood of Noah’s day left huge fossil graveyards all over the world.

Whales do not usually end up in a dry desert over a kilometre (0.6 miles) above sea level. But this is what has happened in the Atacama Desert in Chile. Palaeontologists dug up at least 75 well-preserved whale fossils. They found the mass graveyard when the road leading through the desert had to be widened.

Most of the fossils were of eight metre (25 feet) long baleen whales. They also discoverd a sperm whale and a dolphin with tusks. A sloth and a seabird bigger than a condor were found elsewhere in the desert.

The researchers assume that the whales met their end ”2-7 million years” ago. The idea of millions of years is an ideological view that should be examined critically, however.

Dating methods do not measure age but the proportions of different isotopes in rock, for instance. The idea of radiometric dating is based on the assumption that circumstances on earth have been rather similar throughout history – although even evolutionists admit that this is not true.

Nicholas Pyenson, a curator at the Smithsonian's National Museum of Natural History, thinks that the desert was once a lagoon.

A more logical explanation would be that the whales met their end either during the Flood of Noah’s days or in the ice age following it. Genesis describes a yearlong global catastrophe that changed our planet’s topography radically. Huge fossil graveyards have been found all over the world. They are testimony of a catastrophe that destroyed life on the early Earth.