Palestine, UNESCO and the Kristallnacht of November 1938 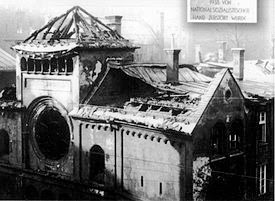 The roof of this synagogue in Munich was badly damaged on the Kristallnacht as a result of Nazi vandalism. Image courtesy of Wikipedia.

There is nothing new under the sun. The Jews have throughout history been accused of almost anything, for instance the Black Death of the 1350s. The real reason, in addition to anti-Semitism, has often been jealousy.

The western press and the political leaders in most countries have obviously learnt nothing from the pogroms and the holocaust during World War II, but now, on the eve of the anniversary of 1938’s Kristallnacht, they decided to reward the Palestinians with UNESCO membership.

The Palestinians have not given up their aim of destroying Israel. The Gaza strip has become a launch pad for rockets. Hamas is hitting the Jews with much more destructive weapons than the Nazis who in November 1938 destroyed hundreds of synagogues and shops owned by Jews all over Germany and Austria.
Lähettänyt bwanajoe klo 09:51