Who Killed The TrilobItes? 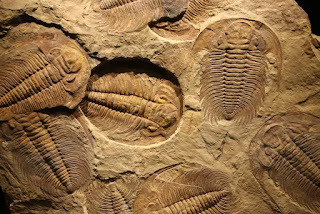 Evolutionists claim that ”trilobites are weird creatures, who looked like  giant swimming potato bugs wearing helmets, and lived on Earth for a whopping 270 million years . These armoured invertebrates, whose species once numbered in the thousands, thrived in the oceans as they scavenged and dug for food, and even managed to survive two mass extinctions.

But about 252 million years ago, trilobites disappeared from the fossil record. What finally wiped out this class of resilient bottom dwellers? “

“The trilobite's disappearance coincided with the end-Permian extinction (also known as the Permian-Triassic extinction), the third and the most devastating mass extinction event. Volcanic eruptions in Siberia spewed enormous amounts of lava for around 2 million years, according to Melanie Hopkins, an associate curator of paleontology at the American Museum of Natural History in New York City. These fiery eruptions sent trillions of tons of carbon dioxide into the atmosphere, triggering ocean acidification, which in turn made it very difficult for marine animals to survive, according to a 2010 paper published in the journal Proceedings of the National Academy of Sciences. Up to 95% of marine species succumbed to the end-Permian extinction, also known as the Great Dying, including the trilobites.”

However, I think that  Noah's flood killed off much of the trilobites. It was probable associated with volcanic eruptions that likely also had an effect on animals.