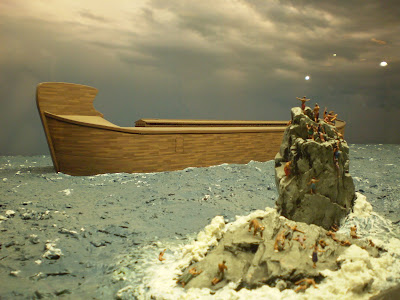 
Hardly a week goes by without someone on the Internet doubting the Genesis account of Noah’s Flood. It seems that most sceptics have not really thought about the issue in depth but are nonetheless eager to doubt that what they do not like.

A recent example of this trend is an article entitled The Story Of Noah's Ark Just Doesn't Float on EzineArticles.com. The writer assumes that conditions before the Flood were more or less identical to what they are today, with Mount Everest reaching its present height. She even thinks that there were polar bears in the pre-Flood world.

As conditions before the Flood were different, there is no need to assume that there even were polar bears, which belong to the same biblical kind as grizzly bears. Once we realise that the Genesis kind is a wider concept than “species”, the need to take millions of animals on board vanishes.

Some of the assumed difficulties border on the bizarre, such as the suggestion that animals disembarking from Mt. Ararat (the Bible actually speaks about the mountains of Ararat) would “have frozen to death at that elevation in a matter of hours” even though conditions there would initially have resembled those at sea level, so freezing would have been impossible.

After the flood, the animals could easily have migrated to the farthest reaches of the globe either on floating rafts or using land bridges.

The ancients were not simpletons. Contrary to what the sceptics say, Noah’s Ark was a very seaworthy vessel, as Korean naval engineers have attested. There is no reason for us to doubt that Noah was capable of seeing to it that the animals on board had enough to eat and drink and that he and his family could dispose of animal waste.

Interestingly, we can find evidence for Noah’s Flood all over the world.