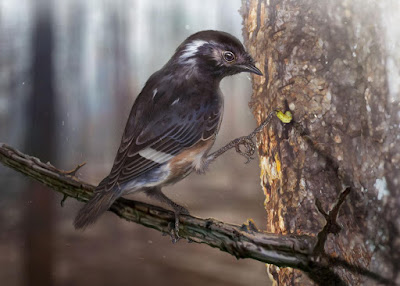 Current Biology has published data on one of the “first” case of a sparrow. It was dated at 99 million years ago.

However According to a Science articles, all Burmese dates entombed in amber rely on a single date.This is something that the researchers should thing about. Nonetheless, for instance National Geographic had this to say:

“One of these ancient fliers might resemble a modern sparrow—except for its bizarrely long toes, an adaptation never before seen in any bird, living or dead.

Yes, a sparrow was found in the age of the dinosaurs. It looked like a sparrow, and it probably also acted like one.

They claim that the region from where the fossil was found “was home to coastal forests full of trees that oozed tree resin.”

I would say that it speaks more of Noah’s Flood. It has left reminiscences everywhere, for instance the Heavitree Gap in Australia.