Diamonds Refute the Old Dogma of Millions of Years 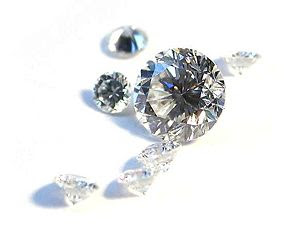 Diamonds speak of a young earth. Image from Wikipedia.

Diamonds recently found in eastern Finland caused Aamulehti, a major Finnish daily, to associate them with millions of years. According to the paper, the extremely old (2.5 billion year) bedrock might well contain an abundance of diamonds, bringing about a veritable diamond boom.

While Finland would gladly welcome a new source of revenue, diamonds do not have anything to do with millions of years. Diamonds disclose a very different message.

In 2005, creation scientists completed a comprehensive research project known as RATE (Radioisotopes and the Age of The Earth). The research results were astounding.

For instance, doctor John Baumgarder found carbon-14 in diamonds. C-14 or radiocarbon as it is also called is produced as cosmic rays bombard the earth’s upper atmosphere, producing neutrons that combine with nitrogen-14 atoms to form carbon-14.

The carbon atoms drift down, combining with oxygen to form carbon dioxide molecules (CO2). Plants and animals absorb some of this carbon dioxide. Once the organism dies, its C-14 content begins to diminish.

C-14 or radiocarbon is carbon’s unstable isotope that has a half life of 5 730 years. Diamonds estimated to be billions of years should not have any carbon-14. However, all the diamonds in the RATE study had clearly observable amounts of C-14.

Baumgardner’s research indicates that the examined diamonds cannot be older than 55 700 years.

Diamonds might thus well be a creationist's best friend.

Sarfati, Jonathan. 2006. Diamonds: a creationist’s best friend. Radiocarbon in diamonds: enemy of billions of years. Creation 28:4, 26-27. You can read the article here.