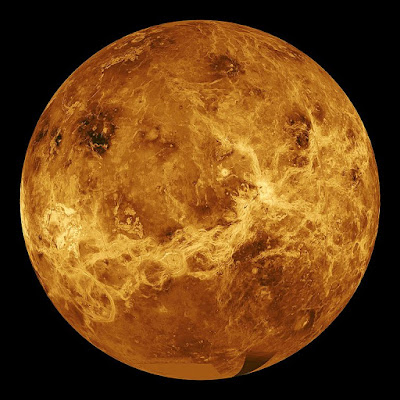 An increasing number of observations don’t support the standard age of the solar system, i.e, 4.5 billion years. Instead, they seem to indicate a much younger date.

The list of “bad dates” is anything but short. It includes Venus, Saturn, Pluto, Saturn’s moon Enceladus and Jupiter’s moon Europa, among others.

“For planetary scientists, Venus's geologic heartbeat flat-lined around 700 million years ago. Now, a global view of some well-known deformation features on Venus's surface may indicate it's capable of crustal motion, and that motion might even be happening today, scientists reported Monday at the 2017 American Geophysical Union Fall Meeting in New Orleans.”

Research presented by Paul Byrne, a planetary geologist at North Carolina State University, and colleagues suggests “signs of deformation within a few of the lava plains.”

At least some of the jostling and moving and rotating could have taken place very recently,” he says.

While they did not find plate tectonics, they certainly discovered signs of unexpected youth.