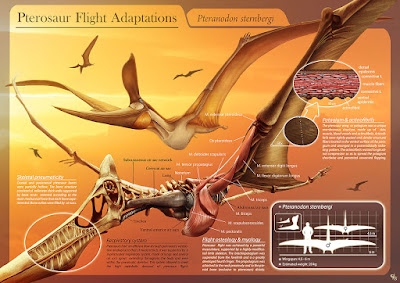 Pterosaurs present many formidable dilemmas for Darwinian evolution. They could grow to be as tall as giraffes and they were almost too heavy to fly.

And there’s more. New research suggests that many pterosaurs of all ages met their death in a flood.

Science polishes the account of their demise with creative storytelling:

“The fossils formed about 120 million years ago when disaster struck a group of pterosaurs. The researchers speculate that when a sudden rain flooded a river, hundreds of pterosaur eggs buried in shallow sand or under a layer of leaves or grass were drowned and washed downstream, along with a number of older individuals. Quickly buried by sediment, the eggs and bones did not decay but instead were preserved as fossils.”

The global flood of Noah’s days is a more logical explanation. It has left animal graveyards, petrified forests and geological formations even in the most unlikely places.

Science focuses on the assumption that these flying reptiles cared for their young. In a Darwinian dog-eat-dog world, parental care might not be self-evident.

But in the creation model it certainly is.