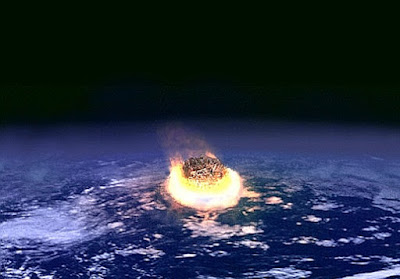 While Charles Darwin's idea of a warm little pond has been discarded several times, it has recently made a comeback. This time it is combined to meteorite strikes, another contentious hypothesis.

A report issues by McMaster's University has the gist of what they believe could havehappened:

”The spark of life, the authors say, was the creation of RNA polymers: the essential components of nucleotides, delivered by meteorites, reaching sufficient concentrations in pond water and bonding together as water levels fell and rose through cycles of precipitation, evaporation and drainage. The combination of wet and dry conditions was necessary for bonding, the paper says.”

The number of logic-defying gaps in this hypothesis is no smaller than in previous ones, for instance in the ones featuring hypothermal vents or things like that.

The heat produced by meteorite impacts would almost certainly destroyed all incipient building blocks of life and the lack of any ozone would have killed of anything that could have survived.

In other words, even the latest scenario is a total disastre. It could not have produced life.