Was There an Ancient Martian Civilisation? US Congressman Asks 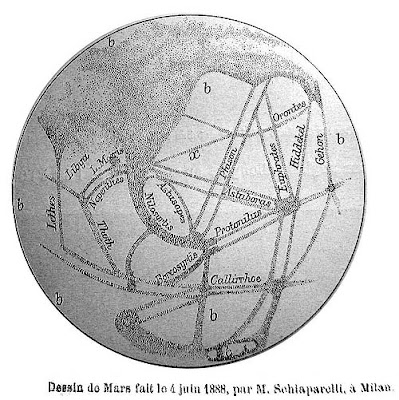 There was a time when people thought they saw canals on Mars. Image courtesy of Giovanni Schiaparelli, public domain.

Mars has a habit of making headlines in both science publications and the popular press, though most news items tend to be pure speculation.

Many people think that the red planet was once blue, sloshing with water.

Time magazine, for instance, has claimed that the Sun helped murder Mars.

Just over a century ago, it was customary to see signs of an alien civilisation on the red planet. Italian astronomer Giovanni Schiaparelli (1835–1910) thought he saw canals on Mars.

However, astronomers haven’t found any evidence of any kind of life – past or present – on Mars.

This hasn’t extinguished speculations. Recently, US congressman Dana Rohrabacher asked during a hearing of the U.S. House of Representatives' Committee on Science, Space and Technology's Space Subcommittee whether Mars was home to an alien civilisation just a few thousand years ago.

The not-so-unexpected answer was – and is – no.

God created Earth to teem with various kinds of life, but as far as we know, there’s none on Mars.