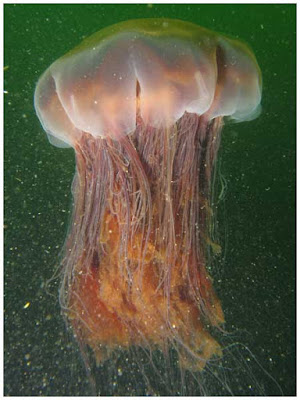 It’s not easy to fossilize a creature like this. Image courtesy of Dan Hershman, CC BY 2.0.

Jellyfish come in many shapes and sizes. They can display amazing navigation skills. Some live three kilometres below the ocean surface.

Evolutionists assume that “jellyfish-like creatures” were already swimming in the Pre-Cambrian seas, some “600 million years” ago.

Recently, Geological Magazine published a paper by Aaron Sappenfield of the University of California, Riverside, and colleagues, introducing a big enigma: a graveyard in the arid Death Valley with 13 jellyfish fossils, said to hail from “540 million years” ago.

The preservation of Cambrian fossils is always a miracle of sorts.

New Scientist sees something exceptional in the discovery:

“The jellyfish in the Cambrian seas seemed to have looked and behaved a lot like they do today. Sappenfield and his colleagues believe that the ancient jellyfish also lived near the shore, until tides or waves pushed them closer to the beach. When the tide receded the animals got stranded, just as modern jellyfish do.

But jellyfish washing up on today’s beaches have a poor chance of becoming fossils. Most are quickly torn to pieces by scavengers or curious children.”

A much more logical explanation would be the global flood of Noah’s day that has left marks all over the globe, including fossil graveyards and geological formations.