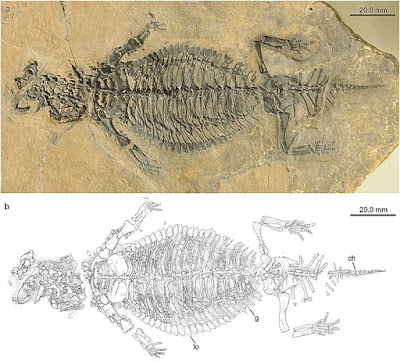 New research published in the journal Scientific Reports includes details that might surprise evolutionists but not creationists.

The paper, by Torsten Scheyer, a paleontologist at the University of Zurich, and colleagues, features a 20 centimetre (8 inchees) long reptile called Eusaurosphargis dalsassoi.

It was found at an altitude of 2,740 meters together with fossils of fish and marine reptiles. While it is believed to be “241 million years” old, it is “exceptionally preserved.”

“Externally, Eusaurosphargis dalsassoi looks very similar to girdled lizards (Cordylidae), a group of small, scaled reptiles (Lepidosauria) that usually live in the dry regions of southern Africa. Some of the more strongly armored girdled lizard species could have served as the basis of mythical dragon legends due to their appearance.”

Obviously, land reptiles should not be buried together with fish and other marine creatures, unless, of course, there was a global flood that threw them in the same graveyard and left reminders of an enormous cataclysm on all continents.

Now, evolutionists have to invoke a fishy just so story:

“Instead of amidst high mountains, a small reptile suns itself on an island beach in a warm shallow sea, where many fish and marine reptiles frolic.”

The Flood is a much more logical explanation, and the convergent part shows that Darwinian predictions (distant relatives should not look alike) are all wrong.