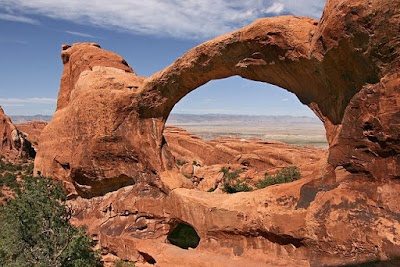 The belief in millions of years has many illogical elements.

One has to assume that natural rock arches can withstand erosion for aeons. For instance, the Aloba Arch in Chad is assumed to be between 2.5 million and 65 million years old.

In addition, it would be difficult to explain why precariously balanced rocks, such as the the Mother and Child Rock in Zimbabwe, are still standing, as geological features can be formed – and destroyed – in almost an instant. Just think what happen to apostle #9 of the famed Twelve Apostles formation in Victoria, Australia.

Recently, Science featured an interview with Jeff Moore, a geoscientist at the University of Utah in Salt Lake City, who is trying to predict when rock arches will collapse.

“Wind, earthquakes, and even faraway ocean waves crashing on shorelines all cause rock arches to vibrate,” he says.

Now, if this has been going on for millions of years, why don’t we see more arches collapsing? After all, human activity (such as “footsteps, car and truck traffic, and sounds from aircraft”) can hardly have had an effect millions of years ago.

Kornei, Katherine. 2017. Are arches like these going to collapse? Meet the scientist who’s trying to find out. Science (28 July).