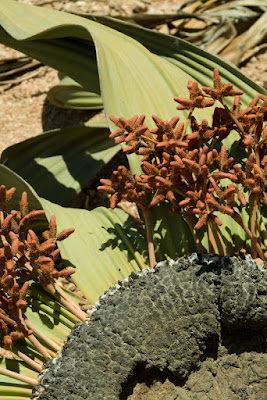 For Charles Darwin, the origin of flowering plants was an abominable mystery. Beauty did not fit in well into a worldview where there was no design and no Creator. What is more, flowers tend to be very complex.

W. mirabilis is a living fossil that obviously can live for a thousand years despite very arid conditions.

“Darwin long pondered the origin and rapid diversification of flowering plants, describing them as an ‘abominable mystery.’ In comparison with gymnosperms, which possess rather rudimentary male and female cones (like the pine cone), flowering plants present several innovations: the flower contains the male organs (stamens) and the female organs (pistil), surrounded by petals and sepals, while the ovules, instead of being naked, are protected within the pistil.”

Then the article describes the proposed solution to the Darwinian dilemma: Welwitschia mirabilis:

“Like other gymnosperms, [it] possesses separate male and female cones. What is exceptional is that the male cones possess a few sterile ovules and nectar, which indicates a failed attempt to invent the bisexual flower. Yet, in this plant (as well as in certain conifers), the researchers found genes similar to those responsible for the formation of flowers, and which are organized according to the same hierarchy (with the activation of one gene activating the next gene, and so on)!”

We would not expect to see an exclamation mark at the end of a paragraph in a scientific article, but there it is.

“The fact that a similar gene cascade has been found in flowering plants and their gymnosperm cousins indicates that this is inherited from their common ancestor. This mechanism did not have to be invented at the time of the origins of the flower: it was simply inherited and reused by the plant, a process that is often at work in evolution.”

It’s a clever explanation in which facts and wishful thinking mesh.

While W. mirabilis might resemble some flowering plants, it does not follow that it shows how flowers evolved from gymnosperms.

Flowers appear suddenly and fully formed in the fossil record.