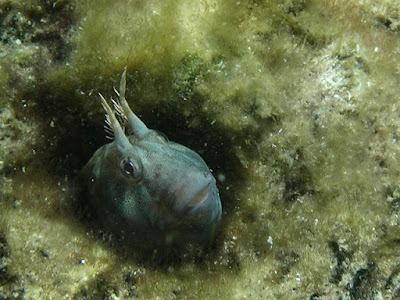 New Scientist describes it as evolution in action. A little blenny fish is probably seeking refuge from predators by climbing up and around wet rocks when the tide comes in.

This prompts the popular science magazine to remind its readers of the assumed evolutionary transition from sea to land:

“Fish first began crawling onto dry land about 400 million years ago, kicking off an evolutionary chain of events that led to humans.”

Darwinian stories tend to be entertaining but they are often a bit fishy.

But without them, evolution would be boring.

Blenny fish come in many shapes, sizes and colours. New Scientist is reporting on the extraordinary behaviour of blennies living in the waters of Rarotonga, the largest of the Cook Islands:

“At low tide, blennies are commonly found swimming in rock pools around the edges of the island. But when high tide moves in, they climb up to dry land and shuffle around the rocks until the tide retreats.”

So, the fish are not moving permanently to land; they only spend some time out of the water, just like mudskippers do.

Some evolutionists thought they saw superfast evolution in mudskippers, but they forgot that these fish would dry out if they didn’t return to the sea.

Like mudskippers, blennies use gills to breath which are good for breathing in water but not so good on land. If they tarry too long on dry land, they will eventually die.

While fish might behave in bizarre ways, it does not mean that they are evolving into something else.

Even walking fish will not solve the Darwinian enigma as they won’t leave their watery world.