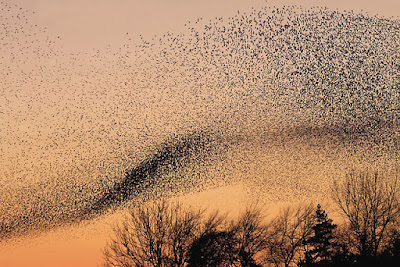 It almost takes a miracle to keep starlings from colliding. When hundreds of thousands of birds fly very close together and none fall to the ground, it well-nigh looks like magic.

But it isn’t. They follow a very precise strategy.

And now it seems that other birds have a somewhat similar trick that prevents collisions.

University of Queensland researchers filmed budgerigars flying towards each other in a narrow tunnel. They repeated the test 100 times, just to be sure, and noticed that almost always the birds veered right to prevent collisions.

Occasionally, the birds used a different approach. According to New Scientist,

“The budgerigars also tended to fly past each other at different heights, which prevented mid-air collisions on the rare occasions that one of the birds veered left.”

They did not observe a single crash.

Researchers hope to use these findings to design more efficient anti-crash systems in drones.

Unfortunately, the researchers decided to give credit to evolution. They believe that birds have evolved these strategies for “150 million years”.

But Darwinian explanations tend to be implausible.

They are hardly more credible than Rudyard Kipling’s just-so stories of How the Leopard got His Spots or How the Camel got His Hump.

Since evolution is a bumbling trial-and-error method, thousands of birds must have collided and potentially died before the strategy eliminated all crashes.

Where are all the fossils?