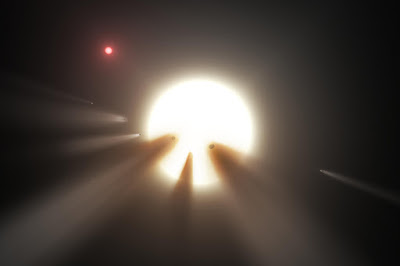 Some thought it was comets. Image courtesy of NASA/JPL-Caltech.

No megastructure. No aliens.

Not so long ago SETI enthusiasts thought they saw evidence of a “massive extraterrestrial construction project”, as New Scientist puts it, near Tabby’s star.

A star can become 1 per cent dimmer when an exoplanet crosses in front of it. This occurs at regular intervals. However, astronomers were unable to explain why Tabby’s star or KIC 8462852, as it is officially known, became 20 per cent dimmer – sporadically.

Recent research suggests that asteroids or alien megastructures can’t explain what is happening. The proposed solution is a swarm of interstellar comets.

The problem is that no one knows whether they exist.

Jason Wright at Pennsylvania State University, who initially came up with the idea of alien megastructures, now thinks the dimming may be caused by an interstellar cloud between us and the star.

This might well be a plausible explanation as Tabby’s star has been dimming for a hundred years or so.

This has not been a good year for the SETI folks. It has cast doubt on the famous wow signal and the strong radio signal coming from the star HD 164595.

It seems that those who reject the Christian worldview tend to believe in more or less bizarre phenomena.

There seems to be a strong correlation between belief in Darwinian evolution and in UFOs, for instance.