Venus, Our Sister Planet, Looks Young But Was Not Designed for Life 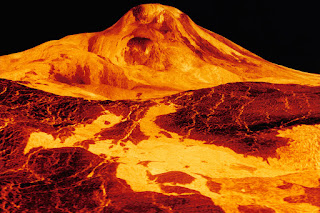 The more we get to know about the solar system, the younger it looks. A paper published recently in Geophysical Research Letters takes a look at Venus, which just like Earth, orbits the Sun in the goldilocks zone. That is, it could potentially be habitable.

New Scientist describes the obvious difference between the twins:

“Venus is leaking lava. Researchers have found oozing volcanoes on our closest planetary neighbour, a discovery that may help solve the planet's deepest geological riddles.

Past observations revealed that Venus' surface is ‘new’, at least in geological terms.”

The article nonetheless defines ‘new’ from a deep time perspective:

“Scientists think the planet has been paved over by upwelling lava within the last billion years.”

It then goes on to say:

“There have been hints of more recent volcanism, too: some terrain looks as young as a few hundred thousand years and we have seen changes in the amount of sulphur – an element produced by volcanoes – in the planet's atmosphere.”

Data sent by the European Space Agency's Venus Express probe that orbited Venus from 2006 to 2014 suggest recent lava flows. This means that the planet is still volcanically active.

It also means that Venus is a lot younger that we were told.

Venus is not the odd one out:

· Mercury has young ice.
· Ceres displays water vapour.
· There are active volcanoes on Jupiter’s moons Io and Europa.
· Copious amounts of tholin on Saturn’s moon Titan suggest that the moon cannot be billions of years old.

While Venus was not made for life, like some other planets and moons it displays signs of youth that can only be explained by a supernatural beginning – the one described in Genesis.

Sokol, Joshua. 2015. Lava lakes spotted on Venus may be how it stays so blemish-free. New Scientist (19 June).