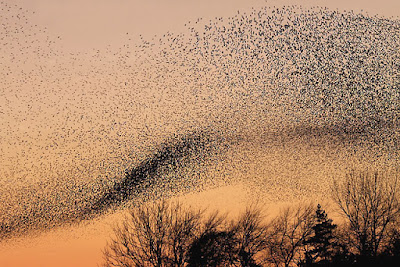 How do starlings that fly in very large flocks coordinate their movements so that they don’t collide with each other? A recent paper in Physical Review Letters attempts to look at the mechanics of exchanging information within the flock.

“Large flocks of around 10,000 birds tend to have softer outlines: one part may change direction, but the rest of the flock does not, leading to a wobbling appearance. Flocks of 1000 birds or less behave more rigidly as direction changes quickly spread across the entire flock.”

It would be exceedingly difficult if not impossible to find a plausible Darwinian explanation for why birds began to fly in large flocks. It is something they do naturally.

Birds such as robins, hummingbirds, cockatoos and bowerbirds display many signs of very intelligent design that cannot be explained away by evolutionary storytelling.