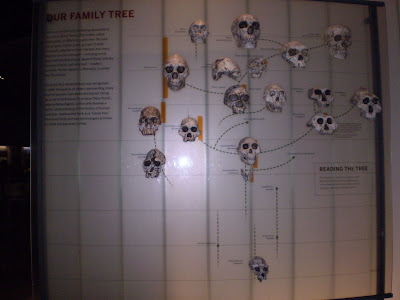 This family tree is based on the erroneous idea of continuous development.

It seems that it is time to discard the idea of grunting cavemen with fingers that were all thumbs.

Last week the journal Science published a report on an ancient workshop where the early inhabitants of South Africa prepared a mixture based on ochre and stored it in abalone shells.

Christopher Henshilwood of the universities of Bergen in Norway and Witwatersrand in Johannesburg, South Africa, who led the work, says the discovery reveals an interesting characteristic of early humans: "This isn't just a chance mixture, it is early chemistry. It suggests conceptual and probably cognitive abilities which are the equivalent of modern humans," Nature news quoted him as saying.

In addition to ochre, bone, charcoal, grindstones and hammerstones were also found in the cave.

According to Genesis, humans have always been clever and innovative. Already in the fourth chapter, Moses mentions the harp and the flute as well as bronze and iron tools.