Cavemen were smarter than we thought 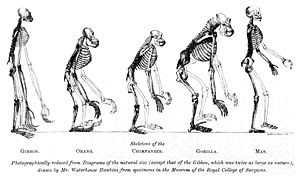 Science textbooks usually present cavemen as very primitive people who were barely able to utter a few monosyllables. However, as additional data about stone age men is unearthed, the picture becomes considerably more complex. It seems that the more we know about them, the more modern traits they seem to acquire.

A recent study published in the Journal of Archaeological Science suggests that cave dwellers wore shoes. Erik Trinkaus and Hong Shang of the Washington University in St. Louis, Missouri studied the toe bones of a skeleton found in a cave near Beijing. They compared these with the toe bones of modern Americans, Inuits and Native Americans from the time before the advent of the European conquerors. Shoes alter the wearer’s toes. People who regularly walk barefoot tend to have strong and large toes while those wearing shoes do not. Trinkaus and Shang concluded that the Chinese cave dwellers regularly wore shoes.

The obvious conclusion is that cavemen were less primitive than we had thought. This same trend can also be seen in how Neanderthal man is presented. The first skulls were found in the early 19th century but they got their name from a specimen discovered in 1856 in the Neander Valley in Germany.(Tal is valley in German). They were initially described as virtually subhuman missing links. With the passing of time, however, scientist have had to discard their previous notions about them. It is now known that the Neanderthals made musical instruments and efficient weapons, buried their dead and even used toothpicks.

It thus seems that the neat progress from primitive to modern man does not exist. The cave dwellers were not primitive people.

I recently wrote about people still living in caves. You can read it here .