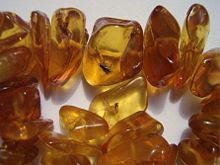 Animals and their parts trapped in amber often show little if any change for aeons. Image courtesy of Wikipedia.

The belief in millions of years is getting increasingly unbelievable. Recently, a report published in the journal Naturwissenschaften described two mammalian hairs trapped in amber. Almost identical to the hairs of modern-day mammals, they are assumed to be 100 million years old.

French researchers found them in a quarry in southwest France. They are not sure what animal once sported the hairs.

We should perhaps compare the discovery to that what Darwinists believe about human evolution. They think that human ancestors lost their fur in under five million years.

Last week, BBC also reported on pelicans that have retained their long beaks for ”30 million years”. These finds suggest that stasis is more common in nature than change.

The BBC website has a photo of one of the hairs.