Neuroscientists are puzzled – the human brain is just too wonderful 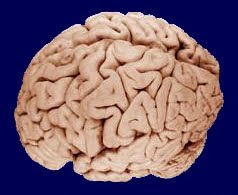 There’s no machinery as effective as this one. Image courtesy of Wikipedia.

One reason why science can at times be fascinating is that views can vary dramatically. A few weeks ago Nature columnist Philip Ball lamented the poor design of humans.

More recently, however, Scientific American columnist John Horgan acknowledged that the human brain is so wonderful that neuroscientists are unable to build artificial brains that would actually work like real ones. They do not even know how the brain works:

”A typical brain contains 100 billion cells, and each cell is linked via dendrites and synapses to as many as 100,000 others. Assuming that each synapse processes one action potential per second and that these transactions represent the brain's computational output, then the brain performs at least one quadrillion operations per second.”

Horgan goes on to say,

”Current brain simulations resemble the ’planes’ and ’radios’ that Melanesian cargo-cult tribes built out of palm fronds, coral and coconut shells after being occupied by Japanese and American troops during World War II. ’Brains’ that can't think are like ’planes’ that can't fly.”

No wonder that King David said, ” I praise you because I am fearfully and wonderfully made; your works are wonderful, I know that full well.” (Psalm 139:14).