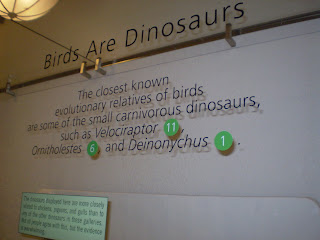 Birds are dinosaurs? A new study throws doubt on an old assumption.

Natural history museums have often informed the public that birds are modern dinosaurs. However, a recent paper published in The Journal of Morphology suggests that the dino-bird link does not exist.

Commenting on their research, ScienceDaily reported:

It's been known for decades that the femur, or thigh bone in birds is largely fixed and makes birds into "knee runners," unlike virtually all other land animals, the OSU experts say. What was just discovered, however, is that it's this fixed position of bird bones and musculature that keeps their air-sac lung from collapsing when the bird inhales.

So a magpie has good reason for not walking like a gecko. What is more, it needs twenty times as much air as its cold-blooded reptilian cousin. Dinosaurs also walked in a way that differs from that of birds.

Professor Ruben also points out that birds have been found earlier in the fossil record than dinosaurs. "A velociraptor did not just sprout feathers at some point and fly off into the sunset," he says.

However, Quick and Ruben are not prepared to discard Darwinian evolution altogether. They believe dinosaurs and birds evolved independently from each other.

This conclusion is based more on worldview and a reluctance to discard the ruling paradigm in the biological sciences than on hard evidence. In many ways, Darwin’s double anniversary has weakened the case for evolution.