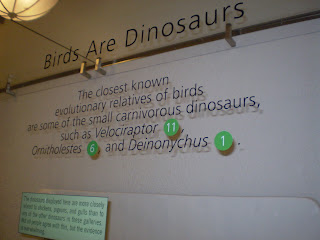 This poster should be taken down

The fossil of a modern-looking bird that lived during the dinosaur era has been found in China. According to National Geographic News, which recently reported on the find, the bird called Eoconfuciusornis zhengi or “the dawn of the Confucious bird” was discovered by Chinese and British paleontologists in the Hebei province in northern China.

The well-preserved bird was found along a lakeside. Eoconfuciusornis probably met a watery death in the lake and was quickly covered with mud and fossilised. It has fully-developed wings just like modern birds and symmetrically balanced tail feathers. These details were clearly etched into stone. “Ecoconfuciosomis was extraordinarily well preserved for the fossil to have contained such depth of detail,” lead author Zhang Fucheng, a professor at the Beijing Institute, said according to National Geographic News.

Estimated to be 131 million years old on the evolutionary time scale, Eoconfuciusornis zhengi is one of the oldest bird fossils ever found. Like the older “jurassic bird” Archaeopteryx , it was a strong flier and could probably perch on tree branches.

The new discovery, published in the journal Science in China, throws a cloud over the dino-to-bird hypothesis that has been the focus of heated debate in recent years. Many natural history museums still advocate the idea that birds are the descendants of dinosaurs. The New York-based American Museum of Natural History, for instance, has a huge poster that says “Birds are Dinosaurs”.

Some scientists maintain that modern birds appeared ”only” 60 million years ago or about five million years after the demise of the dinosaurs. However, a recent study published in the journal BMC Biology by Joseph Brown and his research team examined mutation rates with the help of the molecular clock and concluded that modern birds must have lived during the dinosaur era.

The discovery of Eoconfuciusornis zhengi supports this view. It seems that natural history museums need to update their Dino-to-Bird posters.