Still Too Much Hatred Around – on Holocaust Memorial Day 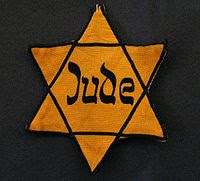 When all German Jews were hated: A Star of David at the Judisches Museum in Westphalia, Dorsten, Germany. Image courtesy of Daniel Ullrich, Wikipedia.

Sixty-four years after the end of the holocaust in which six million Jews were killed in Hitler’s Final Solution, anti-Semitism has by no means abated.

Yesterday, on the eve of the Holocaust Memorial Day in Israel, president Mahmoud Ahmadinejad of Iran took a swipe at Israel at the UN Anti-racism conference.

The timing could not have been more inappropriate. Just as Israel lighted candles in memory of the millions killed at the hands of the Nazis, Mr. Ahmadinejad, always the holocaust-denialist, said the nation of Israel was racist.

The latter-day Haman would want us to forget history. But the holocaust is something we should never, ever forget.
Lähettänyt bwanajoe klo 08:23