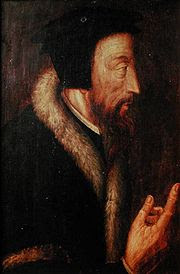 Charles Darwin has recently been the poster boy of practically all science magazines and several other publications as well. It seems that Evolutionists have used Charles Darwin’s 200th birthday and the 150th anniversary of On The Origins of Species as pretexts for hijacking most of the limelight this year.

The secular media has used far less ink and pixels to inform us about the other anniversaries we are celebrating this year. For instance, Abraham Lincoln was born on the very same day as Darwin but we have not heard much about him.

Protestant Reformer John Calvin was born in 1509. July 10 will mark his 500th birthday.

But perhaps the left leaning media is not interested in Protestant ethics as much as it is in just so monkey stories. We have all seen the consequences of the casino economy. There’s not much to say about morals – except that they do not fare well.

Last weekend, when Miss California Carrie Prejean defended the traditional concept of marriage during the Miss USA pageant, homosexual activists were furious but Prejean also got much support from those in favour of traditional Christian values.

Carrie Prejean’s views would be very welcome on this side of the Atlantic as well. It might also be good for our health and values to hear more about John Calvin’s ethics.

Moreover, it would be good to remember that the traditional view of marriage between one man and one woman has its roots in the Book of Genesis.