A Noah’s Ark of Biblical Proportions in Hong Kong 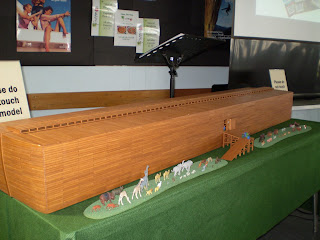 This model of Noah’s Ark was built by Rod Walsh, seen here after a lecture he held near London in June 2007.

Three Chinese Christians have built a model of Noah’s ark that is roughly as large as the original vessel. It has a 450 foot (ca. 140 metres) long hull. The ark is beached on a small island near the Hong Kong harbour. Thomas Kwok and his brothers have planned the project for 17 years and the now completed vessel is the largest ark model ever built.

Noah’s ark has made headlines several times during the past few years. The most famous model is probably that built by Johan Huibers in the Netherlands. It is one-fifth the size of the original ark described in the book of Genesis.

Huibers plans to build a full-size ark in time for the 2012 London Olympics.

Recently, Wall Street Journal reported on the ark built by the Kwok brothers. The vessel has a luxury hotel constructed on the top deck and 67 pairs of fiberglass animals. It also houses a restaurant, an exhibition hall and a children’s museum.

In contrast, Huibers’ ark is a real vessel. It houses live animals.

The global flood of Noah’s time left massive animal graveyards in its wake. Some of them have been discovered recently.

Noah’s ark speaks of God’s justice and righteousness. It also illustrates His mercy. In the midst of judgement, He was ready to remember those who obeyed Him and saved them from destruction.