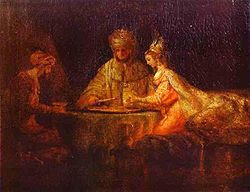 This week many Jews are celebrating Purim and re-living the events described in the Book of Esther.

What does the Old Testament Book of Esther have to do with Darwinian evolution? More than we might suspect.

While it does not even mention God, Esther clearly shows His providence in sparing the Jews from the fate an evil man called Haman had planned for them.

Set in Persia during the exile when Xerxes or Ahasuerus, as he is also called, ruled over the Persian empire, the Book of Ester recounts a moving drama. Soon after the young Jewess Esther became queen, Haman plotted to kill Mordecai, an official in the king’s court, and all the Jews in the empire.

Haman chose the day to destroy the Jews by a random method (the throw of a dice). Haman was an Amalekite. David Klinghofer, writing for the Evolution News and Views blog, shares some interesting details about the name Amalek:

The Hebrew text associates Amalek with the word “keri,” which means a chance or random event: “Remember what Amalek did unto thee by the way, when ye were come forth out of Egypt; How he happened upon thee (karecha) by the way, and smote the hindmost of thee, even all that were feeble behind thee, when thou wast faint and weary; and he feared not God” (Deuteronomy 25:17-18). The same Hebrew verbal root can mean to “cool” someone’s ardor, put a chill in his faith.

All these meanings are given by the classical medieval commentator Rashi in his notes. He in turn drew on midrashic works a thousand years older. The word “Amalek” also, according to Hebrew numerology, has a concealed meaning linking it with another Hebrew word, safek, or “doubt.”

But Haman’ s plot fails and the king orders him to be hanged. Mordecai, who previously saved the king’s life, is exalted. And for many centuries the Jews have celebrated Purim in remembrance of what might have been their first holocaust but what turned out to be a victory for them.

Like Haman's method, the Darwinian method is also random. And it also fails to produce that what it is supposed to produce.

The Book of Esther shows that in spite of adverse circumstances, God is in control. Skeptics might believe that history is a mixture of random events but this moving story proves that it is not. The same God who created the world also watches over His people and protects them.