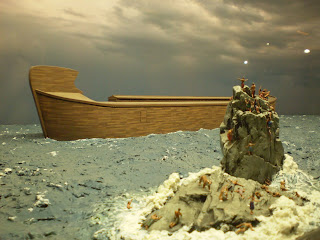 A large dinosaur graveyard has been unearthed near Hanksville, Utah. Dinosaur experts have characterised the new find as “really amazing”. As recently reported by National Geographic News, paleontologists have found at least two carnivorous or meat-eating dinosaurs, a dinosaur with armored plates that is probably a Stegosaurus, and four sauropods or huge dinosaurs with long necks and tails. The sauropods were some of the largest land creatures that ever lived on earth. They could be over 130 feet (40 meters) long. Like the Stegosaurus, they were herbivorous, i.e. they ate plants.

The size of the graveyard came as a complete surprise to scientists from the Burpee Museum of Natural History in Rockford, Illinois, who were digging at the site. In addition to scattered bones they also found partial and complete dinosaur skeletons, freshwater clams and petrified trees. While they did not find any new species of dinosaurs, they hope to discover more about the ones they have previously found.

The Hanksville-Burbee Quarry, as the site is now called, is on high ground but scientists believe the fossils were “washed down during high-water events over several centuries.” The emphasis should be on the word “believe” as there is no way of making sure that the graveyard was not formed in a single watery catastrophe, such as the biblical flood described in Genesis, which by no means was a tranquil little flood but a disastrous global catastrophe that could be expected to form fossil graveyards.

The new graveyard is just one of many similar mass burial sites found all over the world. Many if not all have signs of being caused by a watery cataclysm.