No Evidence for Noah’s Flood? 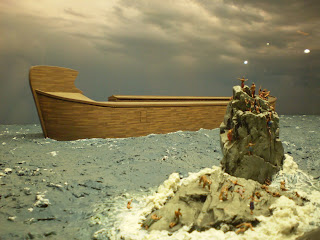 A UK-based atheist blogger recently took issue with the biblical view of Noah’s flood. He claimed that there was absolutely no evidence for it.

Might the words of the apostle Peter explain why some skeptics resist even thinking about the year-long global event that was God’s judgement on a rebellious people?

Scoffers will come in the last days, walking according to their own lusts, and saying, “Where is the promise of His coming? For since the fathers fell asleep, all things continue as they were from the beginning of creation.” For this they willfully forget: that by the word of God the heavens were of old, and the earth standing out of water and in the water, by which the world that then existed perished, being flooded with water. But the heavens and the earth which are now preserved by the same word, are reserved for fire until the day of judgment and perdition of ungodly men.
- 2 Peter 3: 3-7.

Jesus Christ also used the global flood as a warning:

As it was in the days of Noah, so it will be at the coming of the Son of Man. For in the days before the flood, people were eating and drinking, marrying and giving in marriage, up to the day Noah entered the ark; and they knew nothing about what would happen until the flood came and took them all away.
- Matthew 24: 37-39.

There is plenty of evidence for Noah’s flood. Consider the following, for example:

While God judged the world, He provided a way of escape for those who trusted in Him by instructing Noah to build a huge ocean-going vessel.
Lähettänyt bwanajoe klo 09:13