Why Do Atheists Use Theological Arguments? 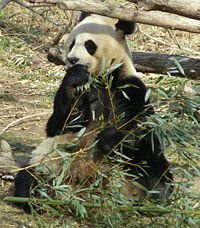 These thumbs are good for holding bamboo. Image from Wikipedia.

A few days ago, a UK-based atheist, whom we might call Ben, took issue with some of my recent posts, including this and this. Ben’s thesis was built on two premises: (a) evolution is a fact, and (b) all who doubt evolution do so for religious reasons.

What makes Ben’s feedback interesting is that he uses theological arguments. Of course, we should not be too surprised since evolutionists from Darwin through Gould to Dawkins used, and are still using, theological arguments to defend evolution. Recently, New Scientist also joined in singing in this wonderful choir.

Ben stated, for instance, “The concept of intelligent design in general does not account for the many examples of astoundingly poor design we see in nature” and “human eyes have their wiring ‘in front’ of the light catching cells, leading to slightly poorer vision and the ‘blind spot’.”

Now, “astounding poor design” seems to be a highly speculative view. Although we live in a fallen world, most Pandas seem to be able to handle bamboo with their “poorly designed” thumb. Why would scientists so often try to emulate nature, if there weren’t anything to learn from gecko feet and other marvels of creation?

The human eye is actually far better than any camera. Richard Dawkins popularised the view that the human eyes is poorly designed but eye experts have repeatedly shown this to be false.

But the question remains: why do atheists use theological arguments in defence of evolution? They are breaking the very rules they have set. As Richard Lewontin put it, scientists often choose to make up “unsubstantiated just-so stories” because they “have a prior commitment, a commitment to materialism… Moreover, that materialism is an absolute, for we cannot allow a Divine Foot in the door.”

“Poor design” is an argument that breaks this rule.

It seems that atheistic Darwinist are trying to both have their cake and eat it, without leaving anything for others.