How Did Life Begin? Meteorites Did It! 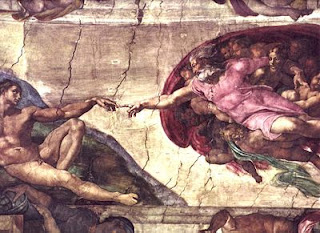 This view might get you expelled. Michelangelo: The Creation of Adam (ca. 1511). Image from Wikipedia.

Since Charles Darwin’s day, theories about the birth of life have come and gone. Darwin famously speculated about life having begun in a warm pond. Researchers tested the idea in 2006 and found it wanting. They examined hot puddles in Kamchatka, Russia, and Mount Lassen in California and discovered that “hot acidic waters containing clay do not provide the right conditions for chemicals to assemble themselves into 'pioneer organisms’. ”

Stanley Miller and Harold Urey conducted a famous experiment in 1953. While it has been used as a propaganda device for evolution, Dr. Jonathan Wells and other Darwin skeptics have pointed out its flaws. Wells said:

The Miller-Urey experiment used a simulated atmosphere that geochemists now agree was incorrect, it was not the ‘first successful attempt to show how organic molecules might have been produced on the early Earth.’ When conditions are changed to reflect better knowledge of the Earth’s early atmosphere, the experiment doesn’t work.

Others have looked to outer space as a potential source of life. Sir Fred Hoyle, convinced that life could not have originated on earth, suggested that it was brought here from space. While this panspermia view has its advocates, the naturalistic answer to how life began on Earth remains as elusive as ever.

A new study by Yoshihiro Furukawa and others published in Nature Geoscience speculates that life did not come from space but meteor impacts might have caused chemical reactions in the primordian ocean, jump starting life. In their simulation, they made chondrite (a common type of meteorite) strike the ocean, managing to produce some organic or carbon-based compounds, such as fatty acids and amines.

While Furukawa and colleagues made sure the results were not due to contamination, others remain skeptical about the significance of their find. Astrobiologist Jennifer Blank at the SETI Institute in Mountain View in California thinks we might never come up with a viable answer.

Indeed, the jump from amino acids to a functioning cell is nothing short of a miracle. Far from being a black box, the cell is an extremely complicated factory that needs to have all its components in place in order to function.

So where did life come from? Life could only come from life. The cell has an enormous amount of information programmed into it. It looks as if it has been designed.

Unfortunately, mentioning the word design is a sure way to get one expelled from academia.