The Christmas Message According to Darwin’s Bulldog 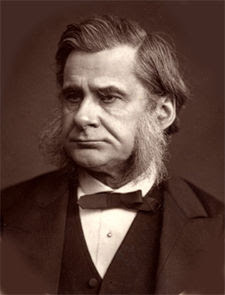 Thomas H. Huxley (1825-1895) was an outspoken critic of Christianity. For instance, in the 1890s he wrote a series of letters to The Times, warning of the dangers of the Salvation Army. He thought that its leadership was all too autocratic.

History has shown us that Huxley’s views on the Salvation Army had more to do with his own evolutionary worldview than with any real danger.

Known as Darwin’s Bulldog, Huxley did more to propagate the “good news” of evolution than his contemporary Charles Darwin.

Huxley was a child of his times. He thought that science had disproved the Bible but found it hard to believe that Christians would try to explain away parts of Genesis and of other Old Testament books as figurative language. In his essay The Lights of the Church and the Light of Science (1890) he stated:

I am fairly at a loss to comprehend how any one, for a moment, can doubt that Christian theology must stand or fall with the historical trustworthiness of the Jewish Scriptures. The very conception of the Messiah, or Christ, is inextricably interwoven with Jewish history; the identification of Jesus of Nazareth with that Messiah rests upon the interpretation of the passages of the Hebrew Scriptures which have no evidential value unless they possess the historical character assigned to them. If the covenant with Abraham was not made; if circumcision and sacrifices were not ordained by Jahveh; if the "ten words" were not written by God's hand on the stone tables; if Abraham is more or less a mythical hero, such as Theseus; the Story of the Deluge a fiction; that of the Fall a legend; and that of the Creation the dream of a seer; if all these definite and detailed narratives of apparently real events have no more value as history than have the stories of the regal period of Rome — what is to be said about the Messianic doctrine, which is so much less clearly enunciated: And what about the authority of the writers of the books of the New Testament, who, on this theory, have not merely accepted flimsy fictions for solid truths, but have built the very foundations of Christian dogma upon legendary quicksands?

Huxley had realised something that the theistic evolutionists of our day have failed to understand. It was the real sin of a real person (Adam) that caused a real Messiah (Jesus) to atone for it by His death on the cross. Hundreds of years before the first Christmas, the Jewish Scriptures had predicted the details of His birth in surprising detail.

Darwin’s Bulldog was right about Christmas. If it were built on “legendary quicksands”, Christians would be the worst sort of liars. But the real Christmas message tells a different story. There are no legendary quicksands in the Bible. The Good News about the baby born of a virgin in the manger at Bethlehem is real history.

He was born to die that we might live forever. And behold, He, the firstborn from the dead (Revelation 1:5), lives.

Huxley, Thomas H. 1890. The Lights of the Church and the Light of Science. In Collected Essays IV. http://aleph0.clarku.edu/huxley/CE4/Lights.html
Lähettänyt bwanajoe klo 05:48