Expelled is the Hottest Item in the Blogosphere 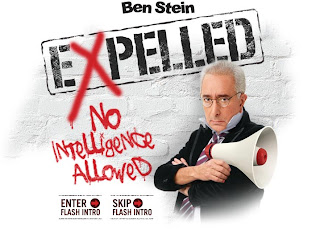 Ben Stein’s film Expelled: No Intelligence Allowed, due to open on April 18, has become the hottest item in the blogosphere. Expelled documents how Darwinists oppress and threaten scientists and science teachers who dare to suggest that everything has not come about and developed through chance alone.

Darwinists are furious. Richard Dawkins, who is interviewed in the film, managed to attend a screening in Minneapolis although he was not invited. Dawkins relied on a minor trick: he gave Clinton as his first name. Technically, he was not lying since his full name is Clinton Richard Dawkins.

PZ Myers, another prominent critic of Intelligent Design, was barred from attending the movie and he wrote a bitter response in the Panda’s Thumb forum. Myers demanded that the supporters of Intelligent Design should be met with ”some form of righteous fury, much butt-kicking, and the public firing and humiliation of some teachers, many school board members and vast numbers of sleazy far-right politicians.”

It is odd that an atheist would publicly speak about righteous fury. After all, righteousness is a Judeo-Christian concept. One might think that Darwinists would not bother with ethical issues but perhaps they do, after all.

Mark Mathis, the producer of the movie, commented on the reaction of Myers and others, saying it was strange since ”these men applaud when professors throughout the nation are fired from their jobs and permanently excluded from their profession for mentioning Intelligent Design.”

Expelled documents how Darwinists endanger academic freedom. It seems that they are now afraid that their monopoly is about to end.