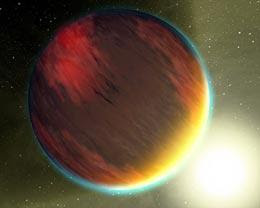 For years, astronomers have been searching for water in our Solar System and beyond it. Water is essential for life, and NASA regards the search for life as one of its major activities. Recently astronomers using the Spitzer Space Telescope detected signs of water on planet HD 189733b, a gas giant or hot Jupiter 63 light years from Earth. Its atmosphere also contains carbon dioxide and methane.

Carl Grillmair of the Spitzer Science Center in Pasadena, California, and his colleagues reported their find in a letter published in the journal Nature. They used the 'secondary eclipse' method to distinguish between infrared light coming from the planet and from its sun.

They probably also detected signs of weather on HD 189733b. The planet orbits its sun closer than Jupiter so chances of finding signs of life are rather slim.

In astronomy, “Goldilocks Zone” refers to a region of space where life could potentially be possible. The name comes from the children’s story "Goldilocks and the 3 Bears. " Lost in a forest, Goldilocks finds shelter in a hut and discovers three bowls of porridge. She tastes the first and finds that it is too hot. The second bowl is too cold, but the third is just right.

Also known as “habitable zones”, these Goldilocks regions seem to be rare in the universe. Carl Sagan was known for describing Earth as a pale blue dot. However, Guillermo Gonzales and Jay Richards wrote a book called The Privileged Planet to refute Sagan’s thesis that our planet is not special.

This was too much for many evolutionists. As Ben Stein’s documentary Expelled: No Intelligence Allowed shows, Dr. Gonzales lost his job merely for suggesting that the universe speaks of design.

Astronomers have found over 300 exoplanets or planets outside our Solar System. They have yet to find a system that would correspond to ours. In most cases, giant hot Jupiters orbit very close to their sun. Goldilocks would find these places far too hot.

In other words, it seems that Gonzales and Richards were right. Earth is a privileged planet. The evidence we see around us speaks of creation.