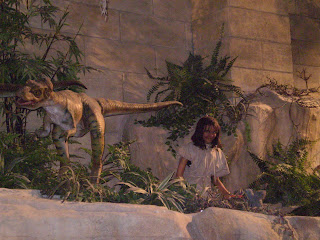 Robbing Genesis? Image from the Answers in Genesis' Creation Museum.

I hate to admit that I have been robbing Genesis lately. I made this astounding discovery when reading LiveScience’s recent article on Karl W. Giberson, a physics professor at Eastern Nazarene College in Massachusetts. He suggested that a historical-literal understanding of Genesis “robs it of everything that is interesting."

Sounds interesting. A glance at the background might be in order. LiveScience reported on professor Giberson’s discussion with Michael Shermer of Skeptic magazine at the Harvard Club. The event was prompted by Giberson's new book Saving Darwin, published by HarperOne. He recommends that instead of getting bogged down in the details of Genesis, readers should “recall that the Bible repeats the refrain that God found what he made ‘good’ and looks at the world as good.”

Giberson was editor of Science and Theology News that I used to read until it became extinct in 2006. The monthly newsmagazine was the brainchild of the John Templeton Foundation. It attempted to tread a middle ground between theistic evolution and all-out atheism. Giberson practically excluded all views that would have presented creationism and intelligent design in a positive light.

While the publication included some insightful views on the reality and significance of spirituality, its “let all religious flowers bloom” approach failed to convince would-be subscribers and it soon went extinct.

However, Giberson eventually found other forums for his approach to origins issues. For instance, he recently debated Ken Ham of Answers in Genesis at Beliefnet.com.

Attempts at reconciling Genesis and evolution have not gone extinct. As Darwin’s 200th birthday approaches, we are probably doomed to hear more on the topic.

When we take a detailed look at the pros and cons of a mythological approach to Genesis, we might reach a conclusion that differs from professor Giberson’s stance. After all, Jesus believed in a literal Genesis and came to redeem mankind because of a literal Fall.

Reading the daily paper might soon give a clue to all but the most downright optimists that the created world is no longer very good, which might lend some support to the view that Genesis is still relevant.

In the meanwhile, methinks I will go on robbing Genesis. After all, I am not utterly convinced that it would mean the end of “everything that is interesting.”